Nano is a light weight xml/json binding framework targeting Android platform, in this post, I will show you how to use Nano and the accompanying compiler tool mxjc together to do schema driven xml or json data binding - similar to the development process using JAXB and XJC. 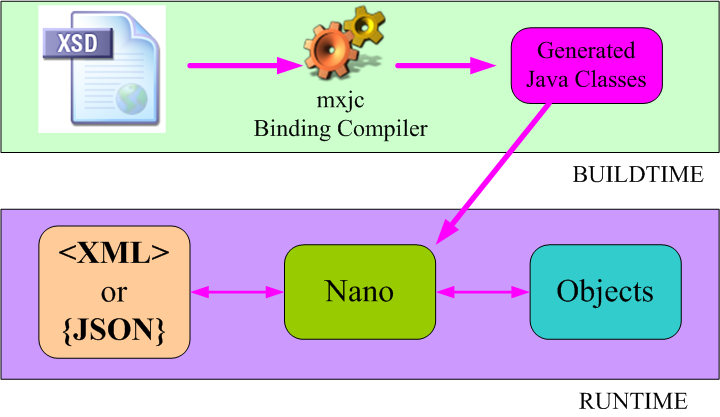 By the way, scheam driven development is good for some scenario with complex business domain, without formal schema and automated code generation, the manual written code base will be very hard to maintain. However, when your use case is simple, it’s not necessary to begin with scheam, just write your domian class then annotate with Nano annations is also workable.

I’ve create an ant project to demo the scheam driven developmeng with Nano and mxjc, you can find the project here, you can download the whole project and run it with Ant(suppose you have Ant installed).

Belew is the Ant build file which includes all scheam driven development stets mentioned above:

The XML document which we are going to read and print in console:

Following is the main java code to read the xml file, output some content, and then write the whole objects into json output.