To use Luxun, you need to have JDK 1.6 or above installed on your operating system, and Luxun supports Windows and Linux operation systems.

Download a recent stable release by following instructions on Luxun github site, then extract zip file to a local folder. Current(when this post is written) stable release is 0.6.0.

Luxun comes with a command line client that will take input from standard input and send it out as messages to the Luxun server. Each line will be sent as a separate message. The topic demo is created automatically when messages are sent to it. You should see something like this:

Luxun also has a command line consumer that will dump out messages to standard output.

If you have each of the above commands running in a different terminal then you should now be able to type messages into the producer terminal and see them appear in the consumer terminal.

Both of these command line tools have additional options. Running the command with no arguments will display usage information documenting them in more detail.

Below is some very simple examples of using Luxun for message producing and consuming, for consuming part, SimpleConsumer is used, both consume by index and consume by fanout id are demonstrated in every case.

Send multiple messages in one request

You can find the source of an advanced demo here, this demo shows:

Below is a figure vividly show the demo scenario: 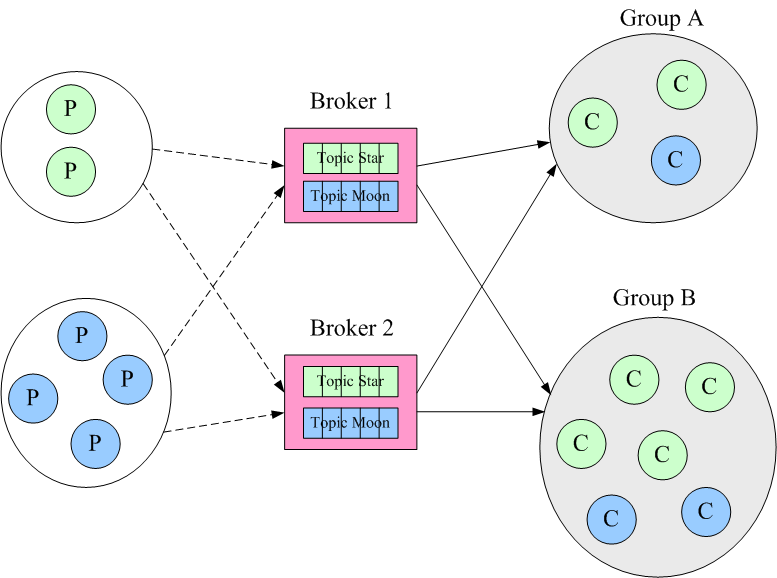 Among different consumer groups, message for a topic will be consumed by each consumer group, for example, both star consumers in consumer group A and group B will get their respective topic star message copy, this is just the fanout queue semantics.