WSDL driven development is a popular and mature development methodology on platforms like Java and .Net, tools like Axis, CXF, JAX-WS, WCF are leveraged by many developers for rapid web service development. With WSDL as interface contract, both server side and client side proxies can be automatically generated from WSDL, developer can work with plain old interfaces/objects directly, no need to worry about low level SOAP/XML serialization/deserialization and service invocation details(which are very tedious and error-prone), this kind of model driven development(or meta-data driven development) can not only dramatically reduce initial development cost, but reduce long term maintenance cost.

Although nowadays there is a trend toward RESTful service(which has no formal interface definition like WSDL), many industries(such as ecommerce industry) have a complex business domain, it’s very hard to expose complex business logic as RESTful service(a typical maintenance nightmare), so we will keep seeing that many enterprises will keep exposing their services as traditional SOAP or XML based web services, some examples are Amazon Product Advertising Web Service, eBay Finding, Shopping and Trading Web Services, etc. 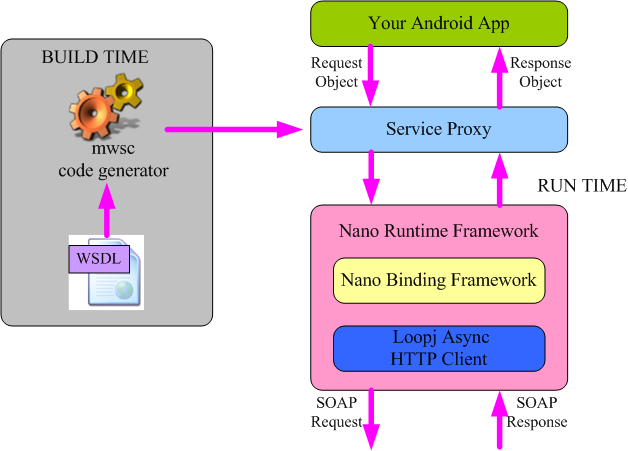 The picture above is the blueprint of WSDL driven development on Android. The left part of the blueprint is a build-time phase view, in this phase, we will leverage mwsc wsdl compiler to automatically generate service proxy from wsdl, the service proxy alone can’t be used directly, it must be integrated with the generic Nano Web Service client framework to take effect; The right part of the blueprint is a runtime view, a typical flow starts from your Android app, your app issues request on service proxy, the proxy passes the request to the Nano runtime framework which will delegate the object to XML/SOAP marshalling work to Nano binding framework then send serialized XML/SOAP request to external service through loopj async HTTP client component, when an XML/SOAP response is received by the HTTP client component, the Nano runtime framework will also delegate the XML/SOAP to object unmarshalling work to Nano binding framework and passes the deserialized response object to the proxy which will eventually return the response object back to the calling app.

We used the synchronous flow in the picture just for simple demonstration, the real call flow in the runtime is asynchronous, by leveraging Java Thread and ThreadPoolExecutor, in order not to block main UI thread.

The Nano binding framework is the core of the Nano runtime, the real object<->xml binding magic happens here, below is the architecture of the binding runtime: 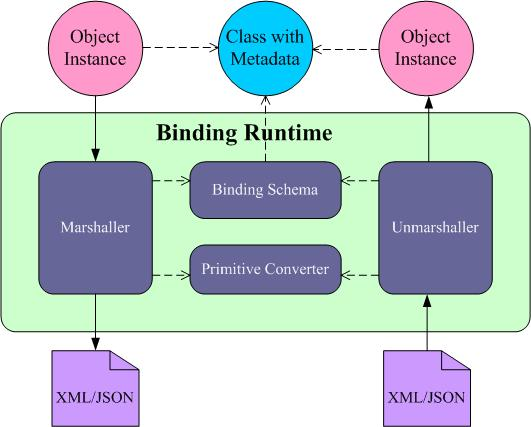 There are four main components:

The marshalling/unmarshalling algorithm is recursive in nature:

The code generator component is based on JAX-WS Wsimport and Freemarker template engine, see the whole architecture below: 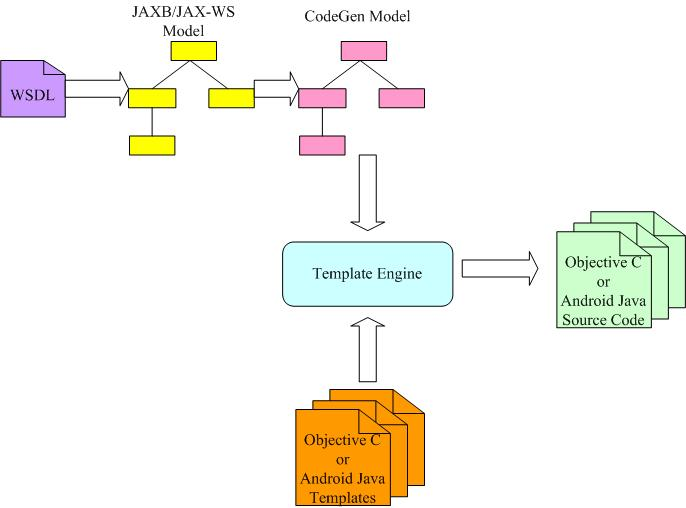 The whole architecture can be summarized as Model + Template = Code, code generation flow as following:

As I know, there is no existing WSDL code generation tool tailored for Android platform, the mwsc code generator just filled this gap, it is backed by JAX-WS Wsimport, which is mature and stable, and can recognize most standard WSDL/Schema components, by delegating the most tricky and complex wsdl model transformation task to Wsimport, the mwsc code generator solved the WSDL to Android Java(or Objective-C) problem in a simple while elegant way.

The mwsc code generator not only generates simple bean classes from WSDL/Schema, but also generates the XML<->object mapping information(schema) and records these information in the class as Java annotations, the meta-data will later be leveraged by Nano binding framework to guide the XML<->Object transformation at runtime.

With a generic code generation tool and a generic web service client runtime, web service based app development on Android platform becomes easy, there is no low level xml parsing and http handling(which are tedious, error-prone and hard to maintain) any more, developers only need to work with a plain old service interface for service invocation, now they can put their real effort on application logic and UI, leading to agile Android app development.

In later posts, I will show how to put WSDL driven Android app development into practice in a series of tutorials, just stay tuned.